Neil Young's TRANS Mixes: "I Need A Unit to Sample and Hold" 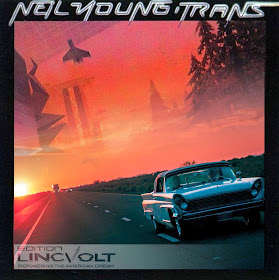 Here's something from the TW mailbag that we'll put out to the Grains community for feedback.

1. (Significant) parts of the Neil Young catalogue seem to be back on streaming platforms (I use TIDAL, cannot really say about Spotify & Co). Not everything, though. A few weeks ago, only the Geffen-era albums have been on TIDAL, apparently because Neil did not like streaming platform's quality. However, TIDAL has always supported high-res formats, too, and recently switched to CD quality even in their lowest-tier offer, so maybe it's that.

2. What I find more interesting is that a different mix of TRANS has appeared on TIDAL, too. In fact, this is the original LP mix. The most notable difference is in Sample&Hold (much shorter and more Crazy-Horse'y), but there are other differences all over the place, too. What strikes me is that I cannot seem to find any information online about why there are two different mixes of TRANS to begin with, or that they even exist. Even NYA doesn't mention it and only features the CD mix. Do you (or your readers) know anything about it?

ps - Actually, the changes seem more likely related to NY's recent transfer of some of his catalogue to Universal Records. I would still be interested in insights about the TRANS mixes.

Thanks for writing Roman.  We did see on NYA that Neil plans to make Trans and other Geffen years albums available in high resolution audio on NYA: “We have finalized our agreement with Universal regarding the Geffen albums. And those albums and tracks will be available on NYA right after the new year.”

Otherwise, we really don't have any ideas about these TRANS mixes.  But likely someone out there in the Grains community might be able to drop a comment below.