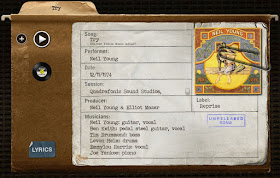 "Try" | "Song of the Day" | Homegrown| NYA
As we have been covering for decades (literally), Neil Young's unreleased 1974/5 album Homegrown is coming ... someday. Today, the latest "someday" for Homegrown is now June 19 (more below).

"Try" is one of the seven previously unreleased songs on the album. Background vocals are by Emmylou Harris with drummer Levon Helm, Tim Drummond on bass and Ben Keith on steel guitar. Per a comment below by Wardo:


The info card for Homegrown now has info cards for each track on the album. Star Of Bethlehem is listed as an alternate mix. The album artwork, with recording dates and performer credits, is up too. 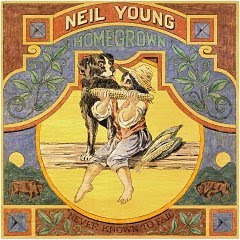 "Homegrown: Never Known to Fail"
Unreleased Neil Young Album
The album "Homegrown" was recorded in 1974 and 1975 and is the "one that got away", Neil writes on NYA. At the time, Neil considered "Homegrown" to be "too personal and frank" to be released and chose to release the album "Tonight's The Night", instead. The Homegrown album has been described by Neil as “the missing link between Harvest, Comes A Time, Old Ways and Harvest Moon”.


"My first ever narration with Ben ‘Longgrain’ Keith and live sound effects. Some beautiful music and fun rockin’ songs as well. This is the one that got away. I am stoked to share this with you.”

The official album release is now scheduled for June 19. Pre-orders for the versions on CD, vinyl and as a download start Friday, May 15th. 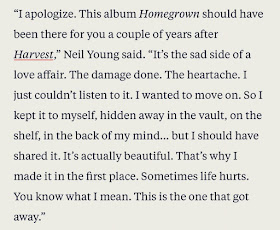 This album Homegrown should have been there for you a couple of years after Harvest. It’s the sad side of a love affair. The damage done. The heartache. I just couldn’t listen to it. I wanted to move on.

“So I kept it to myself, hidden away in the vault, on the shelf, in the back of my mind.

But I should have shared it. It’s actually beautiful. That’s why I made it in the first place.

“Sometimes life hurts. You know what I mean." 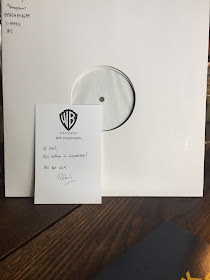 
"this is the first time in our 50 years working together that I have ever received a test pressing with a message like this".

via Neil Young Archives
In April 2019, when answering a letter on NYA, Neil wrote that: "The real 'Homegrown' album is coming out after Tuscaloosa." (More on Homegrown and Other Unreleased Neil Young Albums.)

The track list posted earlier based on rust chatter and John Hanlon's mastering video is now confirmed as:

Most excellent! “Try” is one of my favourite Neil Young piano songs. I had the pleasure of seeing him perform this song live at Massey Hall in Toronto in 2007. I think I heard Neil play a “Try” teaser when he first sat down at the piano during the Fireside Sessions IV.