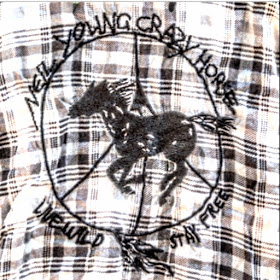 LIVE WILD - STAY FREE Shirt
The shirt above will be available at the advance screening of Mountaintop: Neil Young with Crazy Horse on Tuesday, Oct 22.

However, only 1 shirt will be available at each screening of MOUNTAINTOP and only at participating theaters. Funds raised from will go toward fighting for the protection & rescue of America's wild horses. More details coming.

Want this shirt? A limited number of these have been made. 1 will be available at each screening of - MOUNTAINTOP
Tues 10/22/19 (at participating theaters)

$ raised from will go toward fighting for the protection & rescue of America's wild horses
Stay tuned for more info... pic.twitter.com/47aBhSvqoU

LIVE WILD STAY FREE With much love & gratitude to Robin @magnoliapearl for the creativity and generosity in making these beautiful shirts @NeilYoungArchives is proud to be offering a limited # of Neil Young Crazy Horse embroidered shirts in efforts to support America’s imperiled wild horses Wild horses are living icons of the West, the ultimate renegades who symbolize freedom like the Eagle and the Buffalo. The wild mustangs rights to stay wild and live free are being whittled away, as they are now subjected to artificially imposed herd size limits, brutal round ups, inhumane spay and neuter experimentation and more, all due to private livestock, oil, gas and mining interests on our public lands! 100% of funds raised from these shirts will go towards efforts to keep America’s Wild horses naturally wild and free! Half the proceeds will go to @SkydogSanctuary to support the wonderful work they do in raising awareness and for the rescued mustangs in their care who were rounded up by the BLM from the wild. The other Half of the funds raised will go toward legal fight against a cruel and inhumane spay study being proposed by the BLM Corrals in Burns Oregon. Skydog Sanctuary is a 501c3 non-profit organization EIN # ‪81-3188893‬ that has helped bring over 100 wild horses and burros back to health at their 9000 acre Sanctuary in Oregon where they will remain for their lifetimes. One Shirt will be a available at each screening of the new documentary ~ MOUNTAINTOP showing one day only Tuesday 10/22/19 (at participating theaters) Go to MountainTopTheMovie.com to find the list theaters near you After that a few shirts will be available at Neil Young Archives online store - http://neilyoung.warnerrecords.com 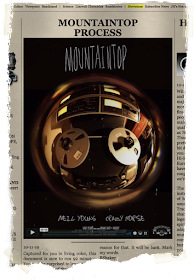 
A raw and extremely unfiltered look at the process of Neil Young with Crazy Horse making their 1st album in 7 years. Witness the laughter, tensions, crusty attitudes & love of a rock & roll band that’s been together for 50 years as they share their passion, first and foremost... for the music. 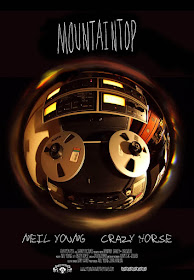 A 2 minute preview trailer of ‘Mountaintop Sessions’, a documentary film about the making of COLORADO, by Neil Young & Crazy Horse was posted in September and below.


“Captured for you in living color, this document is sure to run 92 minutes. You may be surprised to learn some of the deep secrets of the process as you laugh your ass off in a theater near you.

One night only and there is a reason for that.”

As noted earlier, ‘Mountaintop Sessions’ will be released in over 100 theaters world-wide the week the album COLORADO debuts, in October. Along with the preview trailer, is an essay by Bill Bentley on the Neil Young & Crazy Horse studio recording process which is a must read for both content and style.

Bentley writes that: "Neil Young is a born filmmaker. The same sounds he hears in his head he sees with his eyes. He wants to share with those who want to join his journey." Bentley continues to capture the essence of Neil & The Horse: "It's like a 360-degree exposure to what Young's music really is: a life force that sustains not only him but also his audience." 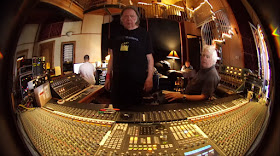 Neil Young w/ Engineer John Hanlon
Typically, comments on YouTube cover the usual standard tired, tropes on Neil Young and his music. The latest wrinkle is the realization by some that Neil is "a dirty old man", as he once admittedly (and somewhat semi-proudly) sang of himself on the album Fork In The Road Chrome Dreams II. (We address the criticism in comments below with our usual fashion here @ TW.)

Neil Young got into the director's chair for 'Mountaintop,' a doc about Crazy Horse's first album in seven years, 'Colorado' https://t.co/7cezvpAfYU pic.twitter.com/YZ3nu5xNq8


“The only thing better than working on a Bernard Shakey film is working on another Bernard Shakey film,” Abramorama CEO Richard Abramowitz said in a statement. “Providing fans around the world with the opportunity to see how Neil and the band put it all together is a particularly rare and exciting experience.” 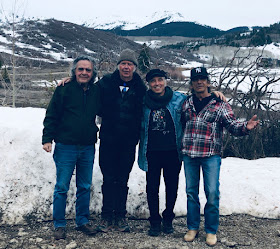 NYCH
Billy, Neil, Nils, & Ralph - April 2019
via Neil Young Archives | Times Contrarian
photo: dhlovelife
Neil says: "One night only and there is a reason for that.” Well, we got our tickets and can't wait for this "one night only" w/ Crazy Horse!
#CrazyHorse4HoF