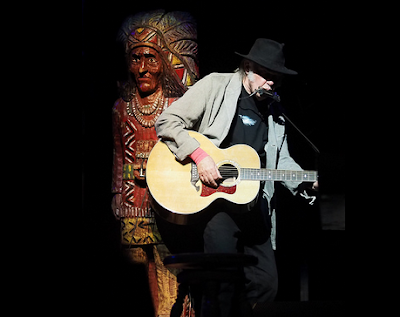 As we mentioned, on Times-Contrarian | Neil Young Archives, on the Road Stories page, Neil posted Bucks Burnett's epic 2014 Dallas concert review, which inspired us to revist the TW Archives. 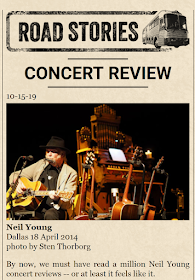 Road Stories
Times-Contrarian | Neil Young Archives
So back by popular demand, Bucks Burnett's "THE YOUNG AND THE RUSTLESS": A Neil Young Column.

From our latest, new best friend. Thanks Buck! - t

When I wrote a lengthy rant/essay about my experience seeing Neil Young play solo acoustic at the Meyerson Symphony Center in Dallas on April 18, I could not have foreseen what happened next; it got picked up by several Neil Young news and fan sites online, did a viral spiral up up and away, and elicited some amazing responses from friends and strangers alike. The strongest reaction I have ever received to anything I've ever created, including my music, art, other articles, poems, photos, etc.

Because of this unexpected reaction, I have decided to create a temporary Neil Young column, which I will write for myself and the NY community, because it has been so nice to connect with all of the Neil fans who have commented or reached out to me. I say temporary because I am quite likely to become distracted by something else and move on. Sound familiar?

But where to start? An essay on Zuma? A story about what it was like to meet Neil in 1987? Why I think his white label promos are amazing? I mean, now nerdy do you wanna get?

I decided to start where I left off; we are going back to the Meyerson. And I will tell you right now this will not be the unexpected hayride to the stars we took last time. This will be different. Please relax while I disappoint you.

People often ask me why I don't write for music magazines. It's very simple; the kind of writing and personal indulgence that made that essay as good as people may experience it to be, is not what magazines are looking for, nor should they be looking for it. I am not a music journalist, and would sooner taste death than become a music writer. My style is a bit too personal/abstract/indulgent for Mojo/Rolling Stone/Etc., but I'm always honored when people suggest it. Not gonna happen. I would rather you be reading this for free after I write it for free, than have you read a watered down version that I got paid to write.

But I raise the abstract quality to make the point of this column; if you read my review of the show, it was a pretty intense description of Neil stealing all of our souls by vacuuming us into his guitar, the one that used to belong to Hank Williams. You need to know something. That was not poetic, or analogy, it was real. I actually believe that I and many others now have part of our souls, maybe a small part, trapped in that guitar forever, until Hank or Neil or Tiny Tim decide to free us, wherever or whyever or whenever.

Everyone I know who saw that show agrees with me; the ones who were slain by Mr. Young all believe that this was not just a stellar performance, but a life altering event which we do not understand. My review was not an attempt to make a crazy point, but an honest attempt to figure out what is different about me and my friends now. And as I wrote it it all became clear. Allow me to elaborate.

Not really in touch with the part of myself that belongs in the Guitar now, I will try to describe it to you as I see it.

I am one ounce small. I am floating effortlessly with many other tiny soul pieces inside Hank and Neil's guitar. It reminds me of the Meyerson; a great old venue to hang in. When you are this small, the inside of an old guitar is really quite roomy. You don't miss the real world very much, as the rest of you, your body, is still outside the Guitar somewhere, working, sleeping, doing all the things you used to. But you don't live in that world or body anymore. You live in the Guitar.

Looking up I see a roof of dimly lit ancient wood. Light comes in, from a spotlight or maybe the refridgerator on Neil's tourbus. We love it when the light comes in. Sometimes it's a flash like lightning, or soft like starlight.

We love it when applause enters through the hole of the guitar. What a thrill! We all feel loved by the audience, and briefly remember when we were people, too.

But most of all, we love it when Neil strums or picks the strings. We feel the vibrations of sound with such force and purity that we are frozen in unity and we hum; we respond to the notes by humming the notes, and we are quite sure that our vibrations to these notes are flying back out of the guitar into the crowd of people, or into the campfire at Neil's Broken Arrow Ranch, or into the bedroom if that's where he's writing a song. Sometimes we see the Piano, and send our greetings to the souls that landed in that. Same with the Pipe Organ. But we all connect with a greater force, a larger deity than we thought possible; it's a benefit of living in the Guitar. We also connect and vibrate with the Wooden Indian.

We love the Wooden Indian, and he loves us. He is our Father. Without language he tells us stories, of when he was a young boy trapped inside a magic tree trunk, and an Old Man came along and cut away pieces of the tree, until much to his surprise, he was not only free from the tree, but all grown up and ready to ride, ready to hunt. But he cannot because he is still part tree and cannot move of his own free will. So he is grateful that Neil moves him, takes him around the world, puts him onstage next to the Organ and the Piano.

He loves to see out into the audience while the houselights are still on. When the Sun sets, very quickly, he knows that Neil will come to the camp ground, the one on the stage in the big teepee, and sing some stories. Songs about old men and Ohio. Songs about a man and a maid, about love breaking a heart. Songs about Cortez. Sometimes when Neil is writing, the Indian will think of a word or two when Neil is stuck, and Neil hears it, and finishes the song.

It is not Neil directing us into the Guitar at the concerts, it is the Indian. The Indian was once a boy trapped in a very old tree. One day an Old Man cut down the tree and carved enough of it away that the Indian was free. Not to move physically of his own free will, but spiritually. With the help of Indian and animal spirits he conducts the moving of souls. Human souls, into the Guitar of Hank Williams and Neil Young. He loves the Guitar. He loves having all of us live in the Guitar and the Piano and the Organ. They are his Relatives, his Family.

He knows they are related because they, too, were once all trapped inside of old trees. They were trapped, yearning for something. Then an Old Man and even an Old Woman came along, and carved them, and used nails and glue and other things until the trees looked and sounded like instruments, the ones they wanted to be.

Ask the Indian where songs come from. Without moving his eyes he will look up, to the sky, and then down, to the ground. And then he will look at you. Sometimes the songs come from you. Did you know that? Then they go to Neil, then they come out of the Instruments that were trapped in trees.

This is very simple and makes perfect sense, once you know it. This is what the Guitar tells us as we float around in it, humming. Listen to the Guitar; it tells the story much better than me.

©2014 Bucks Burnett. Created for free distribution through Neil Young fans and their chosen media. Content owned by Bucks Burnett. Contact bucks1414@mac.com to subscribe to his writing or visit http://cloud8music.com as desired. 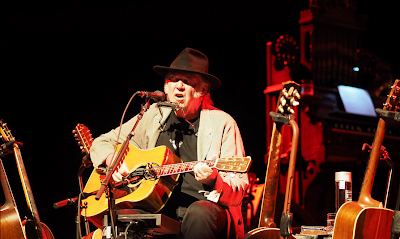