Comment of the Moment: "Chaos Is Good" says Neil Young 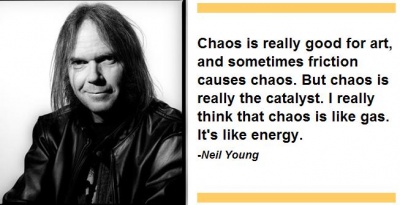 The Comment of the Moment is from the post "Chaos Is Good" says Neil Young by a commenter who goes by the delightful handle ShittyHorse:

Neil has spent a life in pursuit of the muse.

Neil has burned the candle at both ends and stepped through the fire destroyed friendships,turning on his audience and even being sued, all because of the muse. To be close to it and attempt to keep it there.

I’ve seen Neil some nights and it’s like he’s risking life and limb to put out for the audience. I believe Neil is an Artistic medium and the "Great Spirit" or whatever you wish to call it, transmits to him by way of songs- not just writing them but performing them as well.

We are all capable this way if we are open to it, but Neil knows better than anyone how to receive and bring it forth, to interpret, if you will, this signal in song. Others may do it by painting, writing, but also- any creation, any profession can have some form of this. Something’s work and others don’t. Are you inspired? Ever?

The best things just happen, with not much thought. I believe being inspired doing an art, to have the muse with you is the difficult inspiration to find and deal with. Neil Young has spent his life in pursuit of ‘IT’, (we’ll call it) and sometimes it's there and others it’s not. Neil is good at telling when it's there- when the muse is with him, when its strong but one cannot know all the time, but you just gotta try otherwise it'll never happen. I'm sure that when Neil really has to think about what he's doing, he knows it's not happening. “The more you think, the more you stink”

Creativity, in any form is difficult. Creativity by its very nature is energy. Rock n’ Roll is a young man’s game, as is writing- the real fast, crazy, inspiring writing is usually done by a young person. Same with rock n roll. We can all run down a list of rockers who were great in the day or are now terrible or dead. It’s a small list of aging rockers who are just as good, or better as when they first made it. Older people can obviously have it as well but the young receive it better and have the energy to transmit.

Neil, I think, knows this and takes steps trying to harness it, staying real, keeping it fresh by any means necessary. Looking at his career, his words and his life it’s obvious that that there is some other forces at work. It's not just talent, although to do what Neil does requires it. In Neil's case, the talent to sing, to play guitar but also to be able to receive and transmit the muse, the way Neil does, is also a talent.

Neil searches for the right circumstances; full moon, the right players, the right songs. He knows what it takes to open up and many ways are often not good for your health, physically, mentally or emotionally. Neil knows, just like Dylan, that heartbreak brings out the best songs. Intoxication opens you up, frees your mind if you will, you can open up and songs come, but too much this will also chase away the muse. Some stop doing this altogether and the muse is just gone and it's never the same (Aerosmith).

I also think sometimes just playing music will bring it on... getting in the zone, which, in Neil’s case, seems to be done best with Crazy Horse. This is a young man’s game. Too much will hurt you. Chaos is a huge factor in being creative. Many artists keep chaos around them at all times, and it usually kills them. Kerouac and Cassidy went looking for “IT”. I believe they found it, but in the end the chaos it took, killed them. Neil, on the other hand has been able to find it, harness it as best as he can, in a healthy way- by staying creative and always moving- a little stimulation here and there doesn’t hurt either.

I’m sorry but listen to Neil songs, his voice, and his guitar. There is something there that borders on magic. On a good night, even now, under the spotlights in any theater, if the crowd really wants it, you can be a witness to IT- When Neil is completely on, in tune with himself and the energy in the air. He feeds off it and puts it back out there to you, if you’re willing to accept it. It’s a scientific fact that energy never dies, it just changes form.