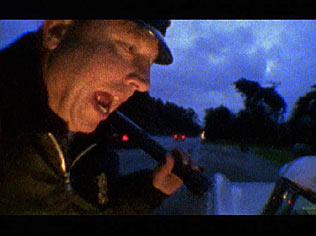 Officer Carmichael Pulling Over Jed
' "Carmichael you asshole,"
the new widow sobbed beneath her veil,
"shot down in the line of duty
is this how justice never fails?" '
via frame from "Greendale" | NYA
The Comment of the Moment is from post "NOW PLAYING: "Greendale" on Neil Young Archives" by Scotsman:


If I were picking my 5 albums for my trip to the WiFi-less desert island (and you can stop celebrating - I'm not actually going), there are several of Neil's seventies albums that wouldn't be able to make the cut. But Greendale would be in there. There's just so much packed into those 10 songs that it would be impossible to leave them behind.

Hopefully you can all sense my enthusiasm every time I start rambling about this album. And it doesn't need to be seen as an "environmental" record: I know that label turns some people off before they even give it a chance. Part of the album's success is that it approaches the (I think, compelling) environmental subject from an angle.

It's really just an album about life, about people, and Neil has stuck with the writing long enough to come up with a progression of songs that are dripping with life themselves. It's a real gem in his collection. It's emotional. It's very relatable. It's a lot of fun. Its packed full of feeling and observations and off-hand insights.

The somewhat scrappy, idiosyncratic performances turn some people off, too; I think the songs and performances have a lot of charm, a lot of attitude, and are robust enough to tolerate the more-than-occasional bum note.

When Neil is inspired, sits down with pen and paper and writes until something great flows out of him (and when he resists the temptation to skip that last bit, the bit that takes some maintained focus), everything instantly gets easier; because he's building on a solid foundation.

I use the "mining" analogy a lot. You need to mine for gold, and Neil needs to mine for great songs, too. The best ones arent sitting there on the surface, and take a little presistance and patience to gain access to. Greendale goes beneath the surface.

This is an album you need to sit with for a while; there are layers to it that are not going to become apparent to you on first listen. I think most people who dislike Greendale have given up on it too early. It's too weird, too different. And it needs to be listened to as a complete piece. But greatness always comes in a form that mentally moves us, and it's not always an instant process.

To get the best out of Greendale you need to relate it not to Neil's life but to your own. It's a story about you. You can find yourself in there if you want to. And I think this album is made for the Sun Greens of this world, but there's so much of life captured here that I think we can all find plenty to relate to. We can see something of ourselves and our fellow humans in these songs.

So as fun and as personal as Neil's Greendale film is, I'd be tempted to bypass it in favour of the wonderful 'Inside Greendale' sessions film. Or just listen to the album. Why skip the film? Neil has used his imagination a lot in making this album: now it's time for us to follow his lead and go to town with ours.

Scotsman - as always, thanks for your insightful contributions. Once again demonstrating that Neil fans/rusties are some of the most knowledgeable and articulate music fans out there.

Yeah, Greendale. We've literally written a book here on the subject. Greendale has been compared to the literary classics of John Steinbeck's work, Thornton Wilder's "Our Town" and Sherwood Anderson's "Winesburg, Ohio" for its complexity and emotional depth in exploring tragedy in a small town in America.