Elliot Roberts Interview: A Revealing Discussion on "The Music Business"

Here is a very rare interview with Elliot Roberts.

Elliot Roberts has been Neil Young's Manager for over 40 years now, as well as many, many other artists such as Joni Mitchell.

From New Orleans Jazz & Heritage Foundation Sync Up interview by Warren Zanes on Feb. 28, 2018, a quite revealing discussion on music and "The Business". Note, that there are audio issue with Elliot's microphone, unfortunately.

Elliot Roberts, Neil Young's manager, was characterized in the biography "Shakey" by Jimmy McDonough this way:


"There have been other infamous artist/manager teams in rock and roll – Dylan and Albert Grossman. Ray Charles and Joe Adams, Bruce Springsteen and Jon Landau – and, of course, Elvis and Colonel Tom Parker. Elliot Roberts definitely resides in that hall of infamy – and is the only human capable of guiding Neil Young's career."

"Neil likes quirky people around him," said Elliot Roberts, Young's manager since the late sixties. "I think having quirky people around him lessens-in his mind-his own quirkiness. 'Yes, I am standing on my head, but look at these two other guys nude standing on their head.' " His mane of gray hair flying, Roberts was on his ninety-sixth phone call of the day, either chewing out some record-company underling or closing a million-dollar deal. Not far away, a bearded, sunglassed David Briggs- Young's producer-prowled the stage, palming a cigarette J.D.-style and looking like the devil himself.

Briggs and Roberts were the twin engines that powered the Neil Young hot rod. Feared, at times hated, both men possessed killer instincts and had been with Neil almost from the beginning. Roberts was a genius at pushing Young's career, Briggs at pushing his art. It's an understatement to say the two didn't always see eye to eye. Roberts and Briggs were two of the quirkiest characters around- difficult, complicated men-but then so was just about everybody and everything in Young's world.

"Let's look at Neil's whole trip-the ranch, the people he plays with," said computer wizard Bryan Bell, who worked extensively with Young in the late eighties. " 'Easy' isn't in the vocabulary." 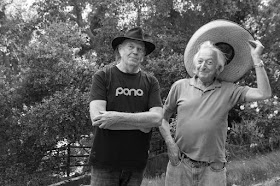