Attention Bergen Neil Young and Crazy Horse Fans: The Show Must Go On! 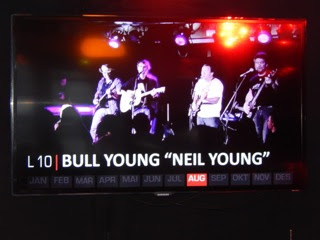 But the show must go on!

From our dear friends "Hounds that Howl" and his "Cowgirl in the Sand" comes this note for undeterred rusties up in Norway:


Rusties and fellow Neil Young and Crazy Horse fans in Bergen Norway tonight are saying "Don't Be Denied". Neil Young songs will be in the air in Bergen on Saturday 10 August at 10 pm the Restaurant Madam Felle. Performing there will be the Neil Young cover band BULL YOUNG. The restaurant is located at Bryggen 47, 150 meters from the concert venue toward the center of town.

While Dinning Harborside at the Madam Felle Restaurant here we struck up a conversation with our waiter Jostein Torsvik. Turns out enterprising Norwegian Jostein not only is a part owner of Madam Felle. He is also a minority owner and employee of a music logistics company that erects the stages for rock concerts all over Scandinavia. Earlier today Jostein and his crew had just completed taking down the stage in Bergen after erecting it yesterday.

"It's unfortunate that it was cancelled," a disappointed Jostein told us. "Neil is popular in Bergen and we don't get to see him that often. He was here in 2008 and we were excited to have him back." Jostein's restaurant hired the cover band Bull Young in hopes of filling the void for the Rusties who are in Bergen this weekend. Thanks to him there is still a "Hurricane" warning for tomorrow night in this proud and beautiful Norwegian Port Town.

Love and Only Love


Thanks "Hounds that Howl" and his "Cowgirl in the Sand"!