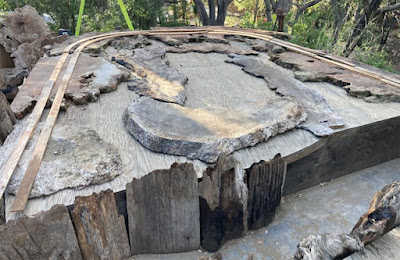 Neil Young's new model train layout is Under Construction in "South of California", per a recent Times-Contrarian | NYA post.

Now that I have settled with my soul-mate Daryl in the South of California where we see a lot of old friends, we are creating a new layout for all the kids young and old to meet and come together again! This time with lots of new grandchildren to play as well!

There will be a long highway built ‘round the edge to allow grandkids to play with their little diecast cars until they have learned how to carefully begin running the trains. The kid’s eyes are all at track level for the perfect perspective. Ain’t that great!!

Both these images show the terrain on only one side of the layout, the west end. The entire layout is divided by a canyon only partially visible in the top picture. In a while, when the layout is solid on both sides of the canyon, construction will advance to the track laying stage. I hope by summer to be surrounded by kids (of all ages) playing with the great old and new electric trains we have collected over the years. We will be bringing you progress reports right here at TRACKSIDE VIEWPOINT in the near future. Stay tuned folks. Watch for Trains!

As Neil mentions in his NYA post, he's a big "train nerd".  He worked with Lionel Trains in the 1990’s to create a control and sound system called TrainMaster and RailSounds.