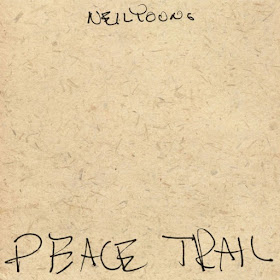 "Peace Trail" by Neil Young
Yet another new album coming from Neil Young.

"Peace Trail" is now scheduled for release on December 2. This is Neil's second album release of 2016 and his 38th solo record of his career.


"The album is primarily acoustic and reflects an intimate, sparse approach that draws the listening into the heart of the songs in a personal way. Each song is rich with Young’s typically inviting lyrical expression of his inimitable impassioned and heartfelt life-long humanitarian concerns which remain as topical and timely as ever.

Peace Trail was recorded at Rick Rubin’s Shangri- la Studios and features Young on vocals and guitar, Jim Keltner on drums, and Paul Bushnell on bass. It was produced by Young and John Hanlon, mixed by John Hanlon."

The track-listing for Peace Trail is as follows: