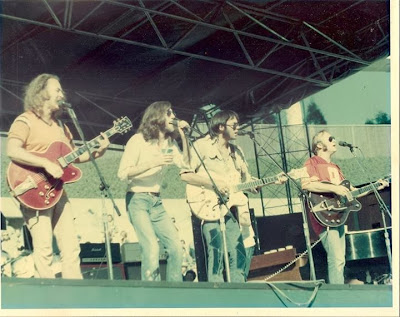 Although unreleased, unheard and more than a month away, opinions already seem to be forming based on 40 years of memories -- both good and bad, it would seem.


We should remember that AT THE TIME these shows were mostly received and reviewed very very well. They were long, varied, had a lot of new material from all four. Bootlegs, while often in sketchy quality, sound like good shows.

Later CSNY trashed the shows. But that had a lot to do with where they were in their lives, excesses offstage, strained relationships in the band, trying to play huge venues for the first time, etc.

I expect that a well curated and mixed set from these shows will be better than the reputation of this tour. If they had followed it up with a great album, it would be remembered differently. Instead it is remembered as a sort of failed reunion. In fact, it was musically very interesting. They all stopped pissing in the wind for a while and showed what CSNY could have been in the seventies.

As for us? Well, we'll reserve our opinion until we actual listen to a few times. In the meantime, we're anticipating greatly and really looking forward to reliving the memories of that Summer of '74. We were there at the Virginia concert on August 17 at Forman Field.

And -- obviously (or maybe not?) -- it left quite an impression upon our young, delicate little mind. 40 years. 40 songs.

Believe us when we say that no matter what memories the box set brings back from 40 long years ago, nothing will ever change the impression that that day made upon us and the music that Crosby, Stills, Nash & Young delivered on that very long, hot sunny summer day.