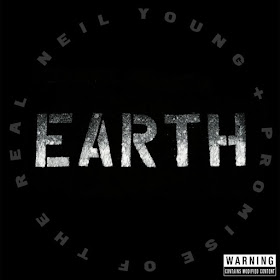 Neil Young's "Earth" (cover)
(Click photo to enlarge)
Neil Young will release a new album, entitled EARTH, on June 17th. The album with The Promise of the Real, is from the 2015 tour.

EARTH features the live recordings, along with added musical overdubs, as well as "sounds of the earth, such as city sounds like car horns, sounds of insects, and animal sounds from bears, birds, crickets, bees, horses, cows - creating a very strange, yet beautiful atmosphere."

"Ninety-eight uninterrupted minutes long, EARTH flows as a collection of 13 songs from throughout my life, songs I have written about living here on our planet together," says Young. "Our animal kingdom is well represented in the audience as well, and the animals, insects, birds, and mammals actually take over the performances of the songs at times."

On Friday, May 6th, in Los Angeles between 7:00pm - 9:00pm, The Natural History Museum Los Angeles County will present "An Evening With Neil Young", as part of their "First Fridays" event series. "First Fridays" is a monthly event at the Natural History Museum. For this event, Young will present the first public playback of his upcoming release, EARTH in its entirety in Pono high definition fidelity audio. Young will deliver the opening portion of the program with his insights and explanation of the making of EARTH, and its contents. This will be the first-ever public album preview by Young in his career and the first event of its kind for NHM.