Update: Reports indicate that Poncho has sustained a hand injury.

Report from Rolling Stone by Andy Greene is that Frank "Poncho" Sampedro broke his hand. "It's a mild fracture," a source close to the Young camp tells Rolling Stone. "He's expected to make a complete recovery in time for the North American tour."

Statement from Way Out West Festival, Göteborg, Sweden -- where Neil Young and Crazy Horse were scheduled to perform tonight:

This is the first we've heard "crash"? Possibly a translation thing?


TOUR DATES CANCELLED
August 8, 2013
For immediate release:
Due to an accident involving Crazy Horse, the remaining dates on the Neil Young and Crazy Horse tour of Europe and the British isles have been cancelled. We are sorry for any inconvenience this causes to our fans or the Festivals where we were scheduled to appear. As you must be, we too are disappointed at this unfortunate turn of events.
-- Neil Young and Crazy Horse

We're as stunned as everyone.

Here's hoping that the accident isn't too serious and the Horse will be able to ride again someday soon. 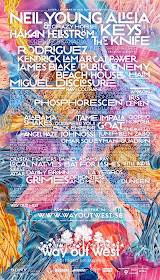